Domingo Zapata returns to Aspen, toasting a year of the Cha Cha Gallery

Domingo Zapata is back in Aspen to celebrate the one-year anniversary of the Cha Cha Gallery — the Hyman Avenue space he opened with Charlotte Lena a year ago.

The Spanish-American painter, 42, is best known for his neo-expressionist polo horses and his playful pop art portraits of celebrities (and occasionally the Mona Lisa, who he recently collaged onto the cover of Playboy). His local gallery is celebrating its year today with an exhibition of new work and an appearance by Zapata, whose new paintings at Cha Cha include cheeky riffs on superheroes and pop-art spins on panda bears and balloon-carrying monkeys.

Along with paintings by Zapata, which are always on view, the gallery has showcased a wide range of contemporary work in its first year, ranging from the emerging local artist Samuel Prudden to celebrity shows such as a July exhibition of paintings by the actor Anthony Hopkins.

“What the gallery is trying to bring is different options,” Zapata said in a recent phone interview from New York. “Some more established, some growing new artists. I think it’s important to bring a spectrum of more commercial work and a mix of maybe also flashy names.”

Zapata has blended his own flashy celebrity and artistry in a manner that’s often compared with Andy Warhol (Warhol, of course, also took a liking to Aspen and its jet-set). And Zapata’s flamboyant personal life has at times overshadowed his artwork. As the New York Times Magazine put it in a 2013 profile, “Domingo Zapata’s best-known work may be himself.”

He’s been known to party with the “Real Housewives of New York” cast and he counts Leonardo DiCaprio and much of the Hollywood A-list as clients. Lindsay Lohan reportedly once struck a pedestrian outside of a Manhattan nightclub while driving Zapata’s Porsche.

He’s painted celebrity subjects like Sophia Vergara and stirred some controversy a few years ago when, commissioned to make a portrait of Kim Kardashian,

he collaged photos of the reality TV star surrounded by Maya Angelou quotes. Zapata may be one of the few working artists on Earth whose love life often lands him on Page Six and in other tabloids.

“I don’t mind it,” he said of his role as a public figure. “At the end of the day, my job is to express myself, to share with the world everything that speaks to my heart.”

The art world’s elite have sometimes turned up their noses at Zapata’s celebrity antics and personal mythmaking. He doesn’t mind that, either.

“I don’t know if sometimes it might open doors, it might close doors, some people like it, some people don’t like it,” he said. “But nobody is going to like what you do all the time. So I keep following my vision and try to do the best job I can and not pay that much attention to it. And in the tabloids, most of the time it isn’t true.”

Zapata’s visit to his Aspen gallery caps off a busy 2016 for the artist. The year included launching a clothing line with Alice & Olivia and a line of sneakers — Superga Domingo Zapata — with Steve Madden. He also sold his debut novel, “The Beautiful Dream of Life,” to Simon & Schuster.

He describes the novel as an exploration of dreams and something of a roman a clef about the decadent lifestyle of a contemporary artist.

“It’s an idea and a concept that I’ve had for many years,” he said. “It’s been something that, in my free time and on holidays, I’ve been writing. That’s a project that’s been going for years.”

The novel, he said, mixes a semi-autobiographical story with sketches and drawings.

“I’m not a writer,” he said. “I’m writing a novel about the life of an artist and it’s a romantic love story but it includes a lot of anecdotes and things I’ve experienced in my life. … I’m not pursuing a career in writing; it’s just something I wanted to do. It’s an opportunity to express myself and explain a lot of the things that are going on in my world.”

One wonders where he’d find the time to write. Describing the workflow of his creative life, Zapata says he paints during most of his waking hours but also attends to all those fabulous social obligations and licensing meetings with fashion designers, while also hopping occasionally to his galleries and businesses (he’s creative director of the advertising agency StudioPMG). 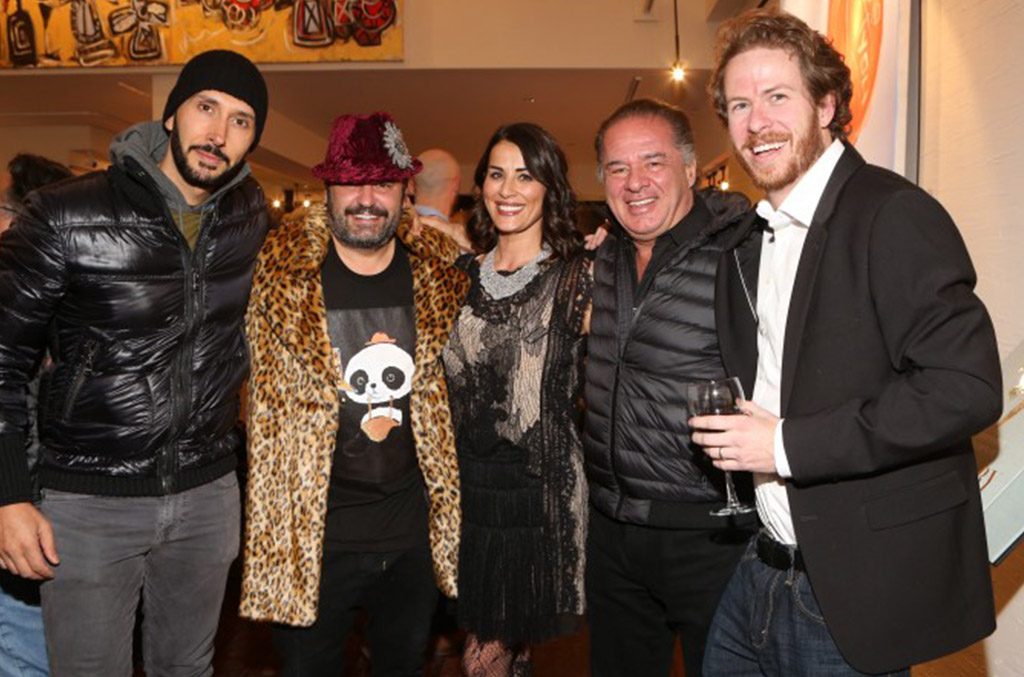